Amelia wanted a Scalar Heart Connection session because she was having a conflict with her oldest son.

Amelia’s heart showed her that the conflict was coming from an issue in the Crown Chakra. The archetypal Quantum Healing Code pattern for the Crown Chakra is about unresolved feelings stemming from the past that can turn to anger and rage. When this happens, we may blame others, become greedy, or seek power and control. The need to control others or situations can be the result of a fearful past event where we felt out of control and threatened or even harmed.

Amelia’s heart showed her that her mind was prone to thinking that life is hard, a constant struggle, and that nothing comes easy. Instead, her heart wanted her to tap into the positive belief that her life has meaning. Her heart also informed her that the issue was affecting her nervous system and there was an unresolved feeling of guilt.

The origin of this issue was when she was eight-years-old. Amelia said she changed schools when she was eight. She said it was an all-girl school and she remembered becoming introverted and insecure. “I became paralyzed. I still have issues with groups of women. I withdrawal and I don’t participate.”

The Unmet Heart Need was “Personal Power.” Amelia’s sense of her own power was diminished by the experience at the all-girls school. The event at eight-years-old also caused Amelia to lose the sense of positive communication between friends and groups. Amelia said that positive communication means everything to her. “There is no sense to life without it. That is why I always try to see the positive in others and try not to hurt people with my words. I am also super sensitive to how people talk to me.” Amelia’s earlier experience taught her that groups are not safe, so she withdrew. The result is the lack of positive communication is now exaggerated to the extent that she demands it from those around her, including her son, whom she feels is not honest or direct with her.

Amelia’s heart informed her that there was something about her dreams at night that was important to this session. Stephen asked her if she had any recurring dreams. She said that she dreams a lot about being tied around her waist and being pulled or held back. “I can’t walk forward.”

From Amelia’s description of the event at eight-years-old and the issue of being tied up, Stephen felt it was appropriate to set up this scenario using doll representatives even though it was not part of the steps in the Scalar Heart Connection session program. At this time, however, there were no dolls available, so Stephen improvised using maté tea cups. The number seven came to Stephen so he asked Amelia to select a tea cup to represent herself and six more to represent who was tying her up. He then asked her to tie the cups in the way that represented her recurring dream. 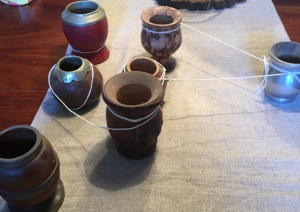 After looking at the tied-up mate cups for several moments she said she just remembered that this actually happened to her at school when she was eight-years-old. She had forgotten that some of the girls tied her up in this same exact manner. She then began to remember the trauma of the event and how she felt she had no control or personal power.

Stephen asked Amelia about the one cup that was off to the side and not involved in her being tied-up. She said it felt like her son. Stephen told her it felt like she was projecting her issue with communication and personal power onto her son. He asked if it was possible that she was compensating by over-controlling her son by making demands on him that weren’t really about him. She said, “Oh, I see. Yes. How interesting. That’s probably where the guilt comes from.”

Stephen asked Amelia how her life is going to be different now that she understands the origin of need to control and lack of meaning in her life. Amelia said, “I am going to stop needing to be in control and dedicate my life to loving others without judgement and in this way become a channel for love to flow through me and to others.” Stephen pointed out the coincidence of her transformation into a cup that holds and shares Divine love to others with the tea cups they used in the session. He said, “Perhaps the experience at eight-years-old caused you to turn your cup upside down and now you can understand the experience as a way for the Universe to teach you something about yourself. Maybe your son is part of your ‘soul group’ and he is here to teach you about anger, control, and how that blocks us from being a Divine channel of Love.”