The Consciousness of Slavery – A Group Session with Family Constellations

By Stephen Linsteadt with Simone Arrojo 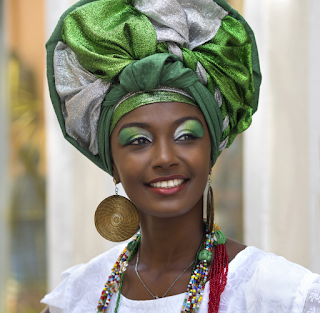 My wife and I arrived in São Paulo, Brasil to teach a Scalar Heart Connection workshop on the weekend that happened to be the celebration of “National Black Consciousness Day (Dia da Consciência Negra).” We were staying at a hotel on Avenida Paulista, which was also the route of the “Black Parade” scheduled for that weekend. The day is a holiday in over 5,500 cities in Brasil, where over forty-nine percent of the population is Afro-Brasilian. We discovered that slavery and systematic inequality and disadvantage for those of color still exists in Brasil. This racial prejudice was difficult to understand because the mixture of indigenous people with those of African descent, Dutch, and Portuguese has created some of the most beautiful and loving people we have ever seen or known. Beneath the surface, however, a distinction exists between white-skin, lighter-skinned indigenous people, and black-skinned people.

The importation of African slaves began midway through the 16th century, driven by the growth of the sugar economy in Brasil as well as the discovery of gold and diamond deposits and the later rise of coffee. During the Atlantic slave trade era, Brasil imported an estimated 4.9 million slaves from Africa. [1]

In 2007, in an admission to the United Nations, the Brasilian government declared that at least 25,000-40,000 Brasilians work under work conditions “analogous to slavery.” The top anti-slavery official in Brasília, Brasil’s capital, estimates the number of modern enslaved at 50,000. [2]  Worldwide, there are roughly 27 to 30 million individuals currently caught in the slave trade industry. [3]

At the beginning of the second day of the Scalar Heart Connection workshop, we wanted to honor the black consciousness celebration by doing a group session around the issue of slavery. One of the students, a corporate manager, said he was having problems with his employees, who were placing demands on his company and complaining that they felt like slaves. Others in the group said the topic of slavery ran deep in Brasil yet was rarely spoken about.

People in the group took turns asking their hearts to show them a number related to each of the steps in the Scalar Heart Connection process. Those in attendance were also students of Simone Arrojo, a teacher and therapist of Family Constellations based on the teachings of Bert Hellinger.

We decided to see how we could combine Family Constellations and Scalar Heart Connection in this session about slavery.

The first number that was selected related to the Solar Plexus chakra and the Emotion of “Anxiety.”

The Negative Mind Belief around the emotion of anxiety was: “I am frozen (captive).”

The Positive Heart Message was: “It is safe for me to make changes.”

The number chosen by the group for the Organ Mentor related to the liver and the statement: “I embrace the transformation within me and within others.”

The Level that this was held was on the Energetic with the statement: “Empathy for a sick person” (sick people in Africa).

The next step in the Scalar Heart Connection process was to choose a number related to the Earlier Experience that created the problem. The number chosen by the group related to: “Collective Consciousness.” This made the group feel like the issue of slavery is one that goes back through the generations of human history, perhaps to the beginning. We felt that we needed to constellate the issue of slavery so we could better understand the complexity of how slavery impacts the collective consciousness today.

Simone Arrojo led the Family Constellation. She first selected someone from the group to represent ‘Slavery’ on the level of the collective consciousness and asked them to take a position in the middle of the room.

Based on the Energetic level statement of “empathy for a sick person,” Simone asked five women to step into the constellation to represent the families of those captured as slaves that were left behind.

One of the women representing the families still in Africa began to shake and then sob uncontrollably. The other four women stood as though “frozen” and powerless. This represented the Negative Mind Statement: “I am frozen (captive).”

A woman sitting in the audience suddenly burst into tears and Simone asked her to step into the constellation and take the position of the sick person (the disease of slavery). We became aware through the constellation that the disease of slavery was also spread to the families in Africa who lost loved ones to slavery. We hadn’t considered the pain and suffering of those who remained in Africa. The slaves themselves, even after freed, had no way of returning to their families in Africa. Today, people of African descent now living Brasil have no way of knowing who their ancestors were or what relatives might still be living in Africa. For them, there is a break in their family lineage and therefore in their biological identity.

In response to the Positive Heart Message of “It is safe for me to make changes” and the Organ Mentor statement “I embrace the transformation within me and within others,” Simone invited another person into the constellation to represent the higher purpose. This person possessed the insight into the higher meaning of slavery and its lessons and motivations for “change and transformation.” 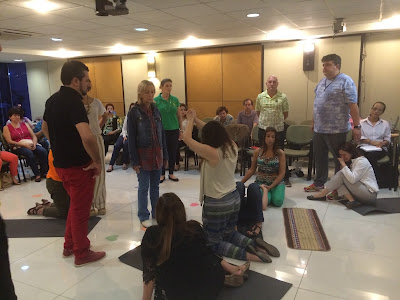 The woman who represented ‘Slavery’ kept saying she was thirsty. Simone said she was thirsty for milk; the milk of mothers. It came up that some slave owners killed the babies of slaves so the mothers could breastfeed white babies. This brought up sexual violence, rape, and the beatings female slaves endured.

The person representing ‘Money’ said she had replaced God. “People killed other people in the name of God.” This brought up the tribal rituals of taking defeated tribes into slavery and of the ritual of eating the heart of the enemy to make themselves stronger. For this reason, body parts were often added to food. ‘Slavery’ said, “Black people killed black people because of rituals.” Simone commented that there were and still are sacrifices made of the less fortunate so the bigger can have life and grow stronger. “We keep doing this today with animals,” she said.

‘Slavery’ said, “I give back all the pieces that belong to your body.”

The ‘Disease of Slavery’ said slavery started with the black people in Africa before the Europeans were involved. We later learned that long before Europeans came to Brasil, indigenous groups in both Brasil and Africa were already enslaving captured members of other tribes. Some enslaved would eventually escape but could never re-attain their previous status in their own tribe because of the strong social stigma it entailed. During their time in the new tribe, enslaved indigenous people would even marry as a sign of acceptance and servitude. For the enslaved of cannibalistic tribes, execution for devouring purposes (cannibalistic ceremonies) could happen at any moment. While other tribes did not consume human flesh, their enslaved were still put to work, imprisoned, used as hostages, and killed mercilessly. [4]

The ‘Higher Purpose’ said, “Slavery is not a problem of White people against colored people. It is a problem of humanity.”

The identity of a slave was stripped away when sold into the slave trade and they were assigned a new identity that came in the form of a new Christian or Portuguese first name given randomly by the baptizing priest. “Such new names served to cut the individuals off from their kinfolk, their society, from humanity itself and at the same time emphasized their servile status.” [5]

The ‘Higher Purpose’ said the issue of slavery is about people accepting other people. “Each person has their own body, their own identity, and their own fate. People need to learn that they don’t need to be owned.”

The group asked their heart to show them a number related to the Unmet Heart Need. This is the feeling that was displaced by the earlier Emotion of “Anxiety” in relation to slavery. The number chosen corresponded to the statement: “Acceptance.”

The Archetypal Hero Pattern the group chose was #11-7-5. This pattern informs us that the archetypal energy of the Issue is in the eleventh house. This is the house of Aquarius related to chaos, indecision, and uncertainty. This is the stage of the Hero where we rebel against authority and old structures (the industry of slavery). The seventh house represents the Obstacle. Here, the collective consciousness is challenged to find harmony in relationship to ourselves and with others. It is the Hero stage where we learn that we don’t have to rely on the outside world to define us or try to fit in. The descendants of those liberated from slavery no longer belong to their original tribe nor are they completely integrated into the new-world society. The disconnection from their ancestors has created a crisis of identity. The Action is found in the archetypal energies of the fifth house. This is the house of Leo, where the Hero re-connects with their inner wisdom and their creative spirit. This is the house of individuation, where we embody our sense of identity; one that is not dependent on outside characterizations. We truly become ourselves and take our place as an integrated member of the global community where we promote generosity, warmth, love, and play.

The next step in the Scalar Heart Connection process is to create a Positive Statement from everything we learned in the session so far. The group felt that the Unmet Heart Need of “Acceptance” was important and therefore created the statement: “I accept and unite with others.”

We then asked our hearts to show the group a number for the Negative Mind Resistance. This is the collective consciousness resistance to accepting and uniting with others. The statement our collective heart chose was: “If I change I won’t be loved.” Simone pointed out that we have been culturally conditioned to satisfy the needs of only our group. To go beyond our own tribe leaves us with no identity. Therefore, we fear that if we change we will no longer fit in and therefore we won’t be loved. The chaos and uncertainty we see in the world may relate on a deeper level to the disconnection we have with each other as a global community. This tension is calling us to find harmony and acceptance both within and without. We have to transform our collective negative behavior towards each other and come together in the spirit of love, generosity, and concern for our fellow human beings.

The Quantum Healing Code that came up for the group was #417-528. This chord combines the vibration of the Pelvis Chakra (#417), the energy center of our feelings related to the womb and childhood/past life traumas, and the Heart Chakra (#528). The group instinctively came together and formed a human figure-eight. We all hummed to this vibration as it played.