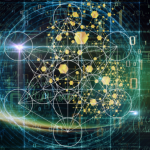 Madeline wanted to do a Scalar Heart Connection session around the issue of feeling like she is always competing with others.

Madeline’s heart guided her to the number related to the Throat chakra. The Quantum Healing Code Archetypal Pattern for the Throat chakra is 3-9-6. This pattern informs us that Madeline’s Issue is about a lack of a sense of well-being arising from mind-brain conditioning that judges self and others. When this pattern is activated it is a call to realize that we don’t have anything to prove and that we are connected to the Divine.

Next, Madeline’s heart directed her to the number related to the emotion of “Sadness.” Madeline said she felt like she is never good enough and that she had a longing to be recognized. She suspected there was an issue of low self-worth stemming from the past.

Madeline’s heart then showed her a number related to the negative mind-brain conditioning statement: “I am silenced.” Madeline said she was aware that the trigger for her Issue was coming from a part she had auditioned for at school; a part that she won and then lost. The director loved her performance and offered her the part. Later, the director discovered that a well-known actress unexpectedly became available and decided to offer the part to her instead of Madeline. Losing the part made Madeline feel “silenced.” It also triggered issues of low self-worth.

The next step in the process is to identify the Positive Response message from the heart. Madeline’s heart showed her the number related to the Positive Response statement: “I speak and communicate my truth from my heart.” Madeline responded to this message by saying, “I need to stay authentic to myself. Perhaps losing the part just gave someone else a chance to shine and I need to go and do my own thing – find out what works for me.”

The Organ Mentor for this session was the Lungs with the statement: “I am infinitely valuable.”

The Level of this Unresolved Issue was on the Energetic Level and the related statement was: “Connection to another person or group causing her the same problem.” Madeline responded by saying that the whole theatrical group is always in a competitive mode whenever they are auditioning.

The Earlier Experience was in the Birth Process, specifically the seventh month in the womb. Madeline said the seventh month was when her parents split up. She could still relate to the feeling of: “Hey, what about me?” She felt abandoned and a sense of competitiveness set in around having to be ‘special’ enough for people to stay in her life.

The Unmet Heart Need, which is the positive resonance pattern that becomes displaced when the vibration of the negative belief creates an interfering and chaotic pattern, was: “Respect.” Madeline felt like she “got no respect.” She said, “Otherwise, my parents would have stayed together. Respect is when people acknowledge me and my gifts and talents and boundaries; acknowledge how special I am and how valuable.” Madeline then recalled the earlier Mentor statement: “I am infinitely valuable.” This is the resonance pattern she needs to re-connect to in order to shift out of the limiting belief that she is always in a competition.

Madeline’s heart directed her to the Hero Archetypal Pattern 11-3-5. This pattern is about breaking out of old structures (Aquarius ruled by Uranus). It is the Hero’s stage of transformation. The obstacle or challenge the Hero must overcome is their own mind-brain conditioning that judges others based on their differences (Gemini ruled by Mercury). In this case the judgment arises on the basis of talent. The Action this pattern is requesting is related to gaining a sense of purpose. It is about what we create (Leo ruled by Sun). The Action is about re-connecting to our inner wisdom and creative spirit. It is the Hero’s stage of crossing the threshold or accepting the challenge. It is also related to the Positive Heart response: “I speak and communicate my truth from my heart.”

The Story or message in the session from Madeline’s heart was an encouragement for her to embrace being a lion and to break out of the habituated pattern of competing for her father’s choice – his choice of leaving her and her mother. In this way, she can now pursue her creative ambitions without the baggage of subconsciously feeling like she is performing for her father’s attention and approval. She is now free to create for the joy of creating and expressing her authentic self.

Madeline created her new Positive Statement: “I am infinitely valuable.”

The Mind Resistance to the Positive Statement was: “I have to be in control.” Madeline said, “I am in control of how I audition. Why can’t ‘they’ see that?” The negative belief of the mind was still trying to have the last word. The need to be in control is also an Aquarian attribute, albeit a negative one. Madeline heard her mind’s objection and made the conscious decision to create a new and expanded resonance habit: to be infinitely valuable just as she is.

Madeline embedded the new and positive resonance into her field of consciousness with Quantum Healing Code #417. This code connects our childhood memories to our Crown chakra, allowing their lessons to be integrated into higher levels of awareness.