What is Metatron’s Cube 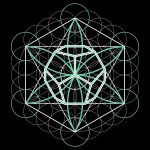 Metatron’s cube is a symbol and a tool for personal transformation. The geometry of Metatron’s Cube is the twin-tetrahedron, from which all of the Platonic solids can be derived: 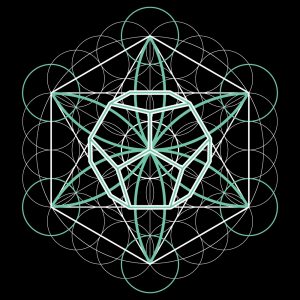 Plato linked these shapes to the elements from which he believed all of creation is formed. These three-dimensional forms appear in almost everything from crystals, plants, flowers, and human DNA.

Little is known about the origin of the name Metatron. The most prevalent thinking places Metatron as the Prince (or Angel) of the Presence, as Michael the archangel, or as the transformation of Enoch after his ascent into heaven.[1, 2, 3]    In the text, 3 Enoch, we find, “This Enoch, whose flesh was turned to flame, his veins to fire, his eye-lashes to flashes of lightning, his eye-balls to flaming torches, and whom God placed on a throne next to the throne of glory, received after this heavenly transformation the name Metatron.”[4]  This is similar to God adding a letter (h) from His name to Abram’s and he became Abraham to designate his spiritual transformation.[5]  This concept is further highlighted by the curious notion that Metatron may have been God’s mediator as the angel who prevented Abraham from sacrificing Isaac in the Bible story. In Exodus, Metatron is the angel that leads the Israelites to the Promised Land, of whom God says, “My name is in him” (as a vibration).[6]

According to Heinrich Cornelius Agrippa in his Three Books of Occult Philosophy (1533), Meratiron (Metatron) was equated to the vibrating Essence and Intelligence of the Divinity, and “fills the whole Universe, both through the circumference and center.”[7] He was the messenger of wisdom—heart wisdom.

Metatron’s Cube has become a symbol for the ‘Presence’ or the Intelligence of the unseen guiding hand. Some may equate this to the source of synchronicity or the unseen helping hands that Joseph Campbell said comes to the rescue of every hero. It is also recognized as a tool for personal transformation.

The concept of Metatron’s Cube used as a tool goes back to at least the traditions of the Kabbalists. According to Abulafian Kabbalists, the proper method of gazing at Metatron’s Cube leads to the image called the ‘Throne of Glory,’ located at the heart center. In other words, gazing into the ‘Throne of Glory’ means to listen deeply within the chamber of our heart so we can connect to the Infinite. In the Kabbalah tradition, the heart can realize its nature as the mediator between the power and beauty inherent in both the finite and the Infinite.[8]

Agrippa, referring to Kabbalah tradition, said there are seventy-two (72) names of the Divine Essence as certain properties, or archetypes, which flow to us for our benefit.[9] Agrippa referred to Metatron as “the prince of faces, whose duty it is to bring others to the face of the prince.”[10]  By “face” Agrippa gives us a clue to look at the faces of the zodiac. From this point of view, Metatron’s Cube can be seen as a matrix that utilizes the archetypal energies of the chakras and the zodiac with its twelve stages of development as a tool for connecting us to our innate intelligence. The Matrix of Metatron provides a blueprint that can aid us through our life’s challenges and personal evolution and transformation. In this respect, Metatron’s Cube acts as an interface between our outer life and our inner Self: 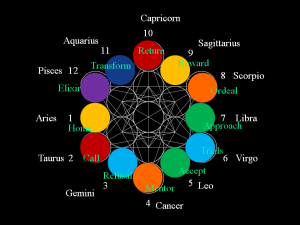 Utilizing the concepts of Astrology, we can see the energetic archetypal patterns that are influencing our current situation. We can also see the obstacles and challenges that Metatron (heart-consciousness) is guiding us to overcome for our own growth and unfoldment. In astrology, a ‘square’ aspectation to any house or other planet signifies a challenge or obstacle. It is there to motivate us towards change and growth: 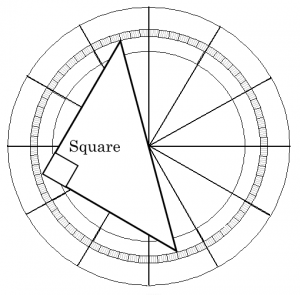 A Scalar Heart Connection session looks at the triangulation of challenging aspects as a guide to the archetypal pattern behind our issues and problems. In this way, we gain insight into what we are being called to learn and integrate from our challenging situations: 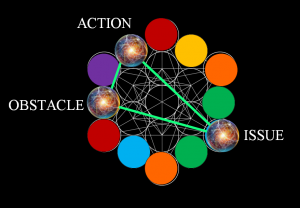 Scalar Heart Connection provides a road map for our journey to the singularity of our life’s purpose: 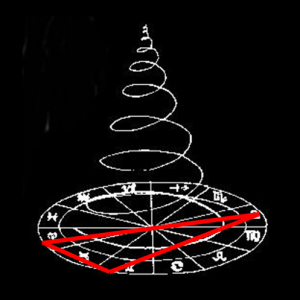 Article by Stephen Linsteadt. Excerpts from his book, The Heart of the Hero.