The Heart of Synchronicity is in the Bag

HomeThe Heart of Synchronicity is in the Bag 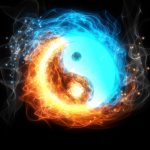 Scalar Heart Connection
Articles
If you only knew the magnificence of the 3, 6 and 9,
then you would have the key to the universe. ~ Nikola Tesla 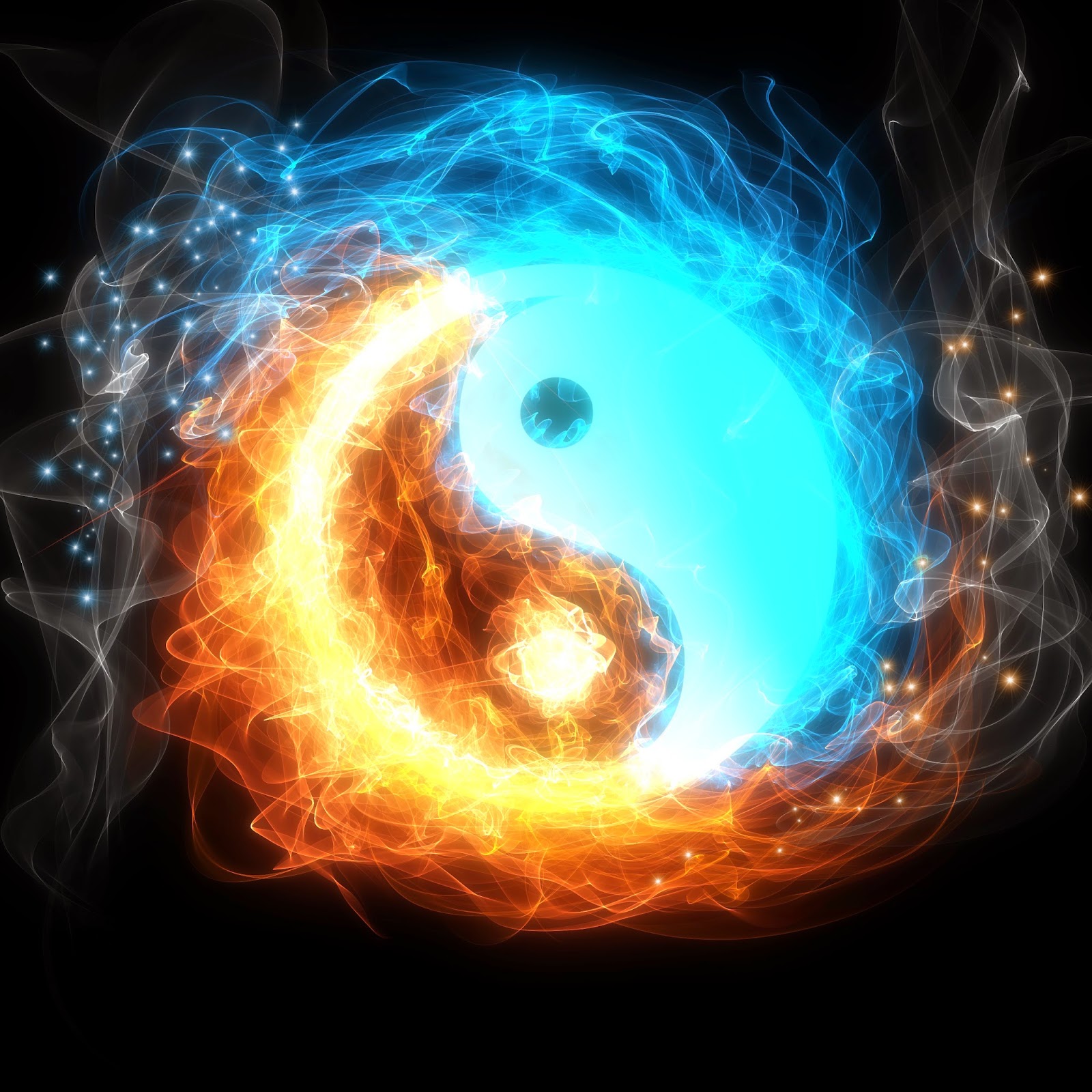 Heart-consciousness is a field from which synchronicity makes itself known. Synchronicity sometimes taps us on the shoulder to make sure we are paying attention to the magic. The magic is like a spell or an invisible ‘attractor’ that causes events to play out purposefully as though each moment evolves toward a predestined result. In chaos theory, the term ‘attractor’ is applied to a set of physical properties towards which a system evolves regardless of the starting conditions. Terrence McKenna believed that our universe is being pulled towards a unifying and connecting Attractor that exists ahead of us in time. Rupert Sheldrake, author of Science Set Free, uses the term ‘attractor’ to describe the energetic blueprint of morphic resonance fields that draws matter into form. When synchronicity makes itself known, one can’t help but sense the Attractor – that self organizing element that pulls or attracts events in spacetime in some meaningful way. I became acutely aware of the hidden, organizing attractor element at a recent family reunion.

Once a year, my extended family gathers at a beach house on the Mendocino coast. It is our custom to play games after the main mid-day meal. This year, we played bingo and set out thirty-nine gift bags for the winners of each round. No one knew the contents of the bags until someone got a bingo. The winner of each round selected a bag and then revealed its contents to the others. We like to add some tension to the family dynamics by allowing the next person to get bingo to have the choice of choosing a bag with an unknown gift or steal a gift from someone who has already opened their bag. We play until everyone has a gift. Choosing a gift is arbitrary. Stealing a gift adds a component of free will, which is voided when someone steals what someone else has already stolen. For the most part, what people end up with is not within their control.

At some point during the bingo game, I noticed that people were getting gifts appropriate to them. The whole group laughed when eighty-four-year-old uncle Fred opened his bag and found a Nat King Cole CD, his favorite. My brother Ken received a Bill Cosby CD; his favorite childhood comedian and the one album he didn’t have in his collection. His wife Jean, the garden designer, received a packet of fairy seeds. My sister-in-law Laura received earrings, which we later discovered my brother Dan originally bought for her birthday, but later decided to donate to the gift bags. My mother, who stays up late every night working crossword puzzles, received – you guessed it – a crossword puzzle book. The last person to open a gift was five-year-old Noah, whose twin brother is Mason. Noah pulled out of his bag two plastic water guns. Without hesitation, he handed Mason one of the guns and they both ran outside to shoot each other. The coincidences of the bingo game were all so uncanny that we all commented on how amazing it was that the gifts almost had a mind of their own.

There was only one apparent flaw in the gift giving that prevented people from thinking it was ‘miraculous’ and that was my gift. I ended up with a pinecone. It was a last minute thing my brother picked up from his backyard to complete the gift bags – it was for bag number 39. It’s good to be the subject of a great laugh once in awhile. We all seem to take our turn at the reunions. People who love you the most feel free to laugh at you. Laughter tickles the heart because it is the one thing the heart and brain can agree to. And funny is just funny. I didn’t want to ruin the laugh so I kept quiet about the research I did the week before about the pinecone being an ancient symbol for the pineal gland and the expanded levels of consciousness that entails. Besides, not everyone at the reunion would have enjoyed a lecture from me on the pinecone being a symbol for Osiris. My nephew, Simon, said he had done a math paper in high school about the pinecone and the spiral it contains related to the Fibonacci number series: 3, 6, 9, 15, 24, 39… I couldn’t help but notice that the number 39 was the same number of gift bags set out for the bingo game.

People have asked the question if synchronicity exists if no one is there to observe it. I wondered if the family members who were noticing the coincidence of the gifts were also searching for meaning behind the coincidence. Is a synchronistic event still synchronistic if we don’t see the meaning? This question made me take another look at the Fibonacci series. I had to know if the Attractor had a purpose. Was there more to the gifts than simply coincidence?

The Fibonacci sequence describes the golden mean relationship within Nature’s growth patterns, such as the famous spiral of the nautilus shell. The sequence generally starts with the numbers 0, 1, 1, 2, and each subsequent number is the sum of the previous two. However, it is also possible to start with the numbers 3, 6, and 9. The first eleven numbers of this series are: 3, 6, 9, 15, 24, 39, 63, 102, 165, 267, 432. The number 432 caught my attention. Just prior to the family reunion I visited Graham Hancock’s website and found an article by Edward Nightingale. The article describes a certain geometry based on the number 432. The number 4320 happens to be the average number of heartbeats per hour (72 times 60). Nightingale provided the following representation of 4320: 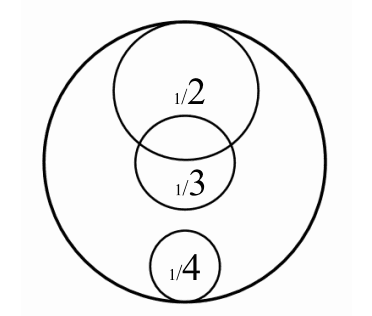 The number 4320 reduces to the number 9: 4 + 3 + 2 + 0 = 9. The number 9 is the symbol of completion or Unity. It can be seen as the ultimate goal of the Attractor. In other words, it is the Attractor and its archetypal dynamisms that lead humanity on a path of evolutionary consciousness. Numbers themselves have a qualitative influence over our life’s remedial experiences, with 9 as the achievement of re-unification with our higher Self. The journey to wholeness was symbolized by G. I. Gurdjieff in the Enneagram. The Enneagram symbol relies on the trinity of 3 – 6 – 9 and incorporates the heart geometry of 4320: 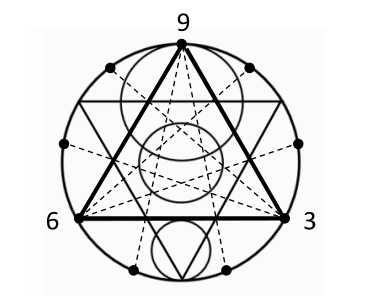 The power of the 3-6-9 trinity is better seen within the multiplication table below, which is based on Vortex-Based Mathematics formulated by Marko Rodin.[1] Vector-Based Mathematics brings numbers to life and shows that the number 9 is the control with all other numbers in dynamic action around the singularity point of 9. The number 9 never changes. All multiples of 9 are always equal to 9: i.e., 9 x 1 = 9; 9 x 2 = 18 and 1 + 8 = 9; 9 x 3 = 27 and 2 + 7 = 9. From the multiplication below we see that the only other time 9 is present is in the series of 3 or 6. The 3, 9, and 6 are always present together in a trinity: 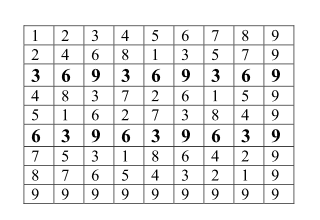 The numbers 3 and 6 can be seen as representing each side of the Yin/Yang with 9 as the “S” curve oscillating between them:[2] 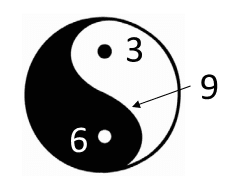 The oscillation that occurs between the 3 and 6 is the result of a doubling or octave of 3, which equals 6. Doubling 6 equals 12, and 1 + 2 = 3. Then 12 doubled equals 24, and 2 + 4 = 6. In this way, 3 and 6 go back and forth. We can think of 9 as the Attractor behind the dynamic energy flowing between the 3 and 6. Gurdjieff considered the circle to represent the process of unfoldment with the divisions around its circumference symbolizing the steps of the process of Self discovery. Who we are within the circle is all our patterns of behavior. The church father Origen said we have more personalities within us than herds of cattle, herds of sheep and goats.[3] Gurdjieff divided the human being as consisting of two parts: essence and personality.[4] Essence represents our true nature: who we are at the level of unified Self. Our personality is what Gurdjieff describes as not really belonging to us because it has been acquired from the outside through parental and societal conditioning. The Attractor pulls us through life’s challenges as the archetypes activate those personality behaviors and patterns so we can become aware of them and work to overcome their negative influences. In this way, the personality content within the circle motivates us towards an expanded realization of our Self that lies outside the circle. Buckminster Fuller reminded us that a circle has two sides; the inside and the outside. The inside of a circle is 360 degrees. The outside of a circle is also 360 degrees. Consequently, the Unified Self must be represented as 720 degrees (360 + 360). And, the number 720 is harmonically related to the average number of heart beats per minute: 72. 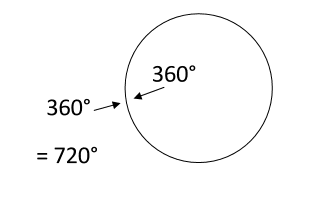 The realization of our true essence happens when our personality becomes passive and essence becomes active. It requires a loosening of our grip on what we believe about ourselves: our ego-identity that is tangled up with other’s expectations. Untangling our essence from our personality requires conscious awareness of our conditioned behavior. This is not a simple task as most of our conditioned responses are both habituated and subconscious. Heart-consciousness is connected to our essence and can bring our subconscious patterns to light, thereby helping us transform them. Scalar Heart Connection is a process that can be seen as the mythological Journey of the Hero where our life’s experiences bring us closer to our essence. Similar to the Enneagram, Scalar Heart Connection utilizes the transformative energy of the numbers 3, 6, and 9. Gurdjieff defined the number 3 as the passive element, 9 as the neutralizing element, and 6 as the active element. When the active element interacts with the passive element, with the help of the neutralizing element, a specific result is achieved.[5] In terms of Scalar Heart Connection and the Hero’s Journey, the number 3 represents the Issue at hand or the activated personality pattern, which generally shows up in our questionable behavior and negative mind-brain conditioned reactions. The number 9 represents the Obstacle or negative mind-conditioning that must be transcended. And the number 6 is the Action the Hero must take in order to accomplish his or her objective (the lesson of that particular stage which is also an integration of our fractured personality-consciousness).

Every Hero’s Journey has its Mentors. The Attractor is both the goal and the motivator of action. The Attractor also provides the Mentors, who help us along the way. Mentors often show up in our lives synchronistically. The portal to the intelligence of the Attractor lies within the heart. When we connect to the wisdom of our heart we are connecting to the dynamisms operating beyond spacetime. Our life’s journey, seen as a process of Self discovery, can be seen as a transcending spiral. The Fibonacci 3-6-9 series results in a golden mean (phi) spiral that coincides with the 4320 geometry of the heart: 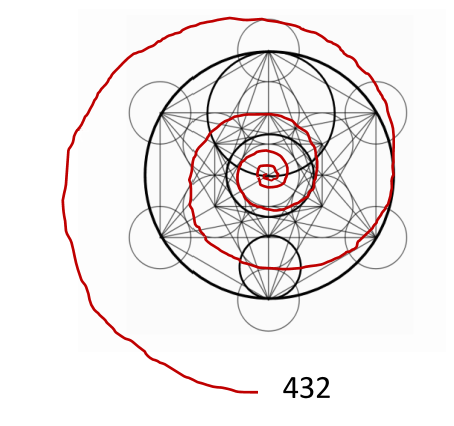 The synchronicity of the pinecone provided the spiral heart geometry that encourages us to endure life’s challenges by learning to see them as opportunities for personal growth. Without suffering and obstacles there would be no forward progress along the spiral; no motivation to change.

On September 12-14, Stephen Linsteadt, Rupert Sheldrake, Graham Hancock, Richard Tarnas, Toko-pa Turner, Gabriel D. Roberts, Gary S. Bobroff and other visionary leaders, whose work has pioneered our understanding of the unity of psyche and matter, will gather at the inaugural Synchronicity: Matter & Psyche Symposium in Joshua Tree, California. Stephen Linsteadt will be at the symposium to present Scalar Heart Connection and to demonstrate how we can be guided by our heart to shift old and limiting beliefs into positive resonances and thereby align ourselves with what is positive, joyful, and life-enhancing. Come join us!