A Chance Meeting with Alberto Santos-Dumont 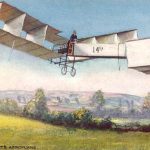 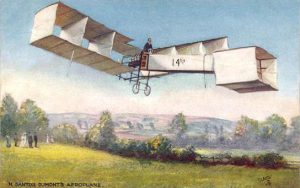 In October, my wife, Maria Elena, and I attended the Bert Hellinger Sciences annual conference of Family Constellation in Germany along with Simone Arrojo, a family constellation trainer. After the conference, on the 20th, we left for Brazil, where we were scheduled to teach a workshop on Scalar Heart Connection together with Simone, who teaches how Family Constellation can be integrated into Scalar Heart Connection. Our flight out of Frankfurt took what felt like forever to taxi to the take-off runway. Forever ended when we saw our original gate outside the window and the pilot announced that the plane had technical problems and had to turn around. He said the technical problems were fixed but by that time the airport was closed and we had to de-plane.

The ground crew told us there were buses waiting to take us to a hotel and that we would be rescheduled for a flight sometime the following morning. We arrived at the hotel at midnight and received a call from the front-desk at one am informing us that a bus was going to take us back to the airport at 7:00 in the morning. By the time we finally took off we had missed our connecting flight that was going to take us from Rio de Janeiro to São Paulo, which had another connection to Florianopolis, where we were scheduled to be at the workshop on the 22nd. When we arrived in Rio de Janeiro it was already dark and there were no flights leaving for São Paulo. Again, the airline put us up in a hotel in Rio. We were almost out of patience. That is, until our shuttle van pulled up to a five-star hotel on Avenida Atlantica, across from the famous Copacabana Beach. We were surprised to feel like we were on an unexpected vacation at the very spot we had dreamed about.

We were going to miss the first day of the workshop, Saturday, unless we made our own flight arrangements from Rio directly to Florianopolis. We made it to the workshop just in time for the first coffee break. Before the break we told everyone about our adventure and how we were sure there must be some significance to our delay and ordeal. Simone said she also had some difficulty arriving to Florianopolis the day before. While landing in São Paulo from Frankfurt, her plane suddenly pulled up from just a few feet from the runway at the last minute. The pilot then came on the PA system and apologized for the sudden maneuver. He said he saw a small plane crossing the runway and had no choice but to pull the plane up or they would have crashed.

After the break, someone said that aviation problems were common in and around Rio. She said it was the curse of Alberto Santos-Dumont, the man known in Brazil as being the one to have first invented manned flight. He achieved the first officially observed powered European flight on October 23, 1906, in France. The Wright brothers had completed several flights in secret, without official observation, three years before, which Brazilians claim did not count for a variety of reasons. Santos-Dumont invented the famous Demoiselle monoplane in 1909, which was the forerunner of the modern light plane. He never applied for a patent because he believed that ‘flying’ belonged to all of humanity. In 1928, he became depressed for several reasons, one of which was over the use of his flying invention in war, and he committed suicide.

Calabouço Airport in Rio de Janeiro was named after Santos-Dumont in 1936. Since the inauguration there have been at least twelve fatal plane crashes linked to the airport. A fire almost destroyed the main terminal in 1999 and the passenger terminal was closed for six months. The Brazilian rock band, Mamonas Assassinas, died in a plane accident in 1996. They left a thank you note in the CD of their newly released album: “To Santos Dumont (who invented the airplane, if not we would still be mixing the album on foot).”

These stories associated with Santos-Dumont made us think that perhaps Synchronicity was trying to tell us something. Simone said that we could do a family constellation movement with Santos-Dumont to see what was happening. We thought to wait until the next day when we would have more time. After the morning break on Sunday, several of the attendees returned excited and out of breath and couldn’t wait to tell us that just down the street from the hotel where we were meeting was a park dedicated to Alberto Santos-Dumont. Simone and I looked at each other and nodded ‘yes,’ we should do a constellation movement around Santos-Dumont.

Simone created a blind-constellation, which means that only she and I knew what was happening. Simone asked someone from the group to step into the constellation circle in the middle of the room. She gave them a piece of folded paper with the word “no” written inside. She then asked another person to step in and gave them a piece of paper with the word “yes” folded inside. No one in the group, not even the people with the notes, knew what the notes said nor did they know who or what they were representing. Simone then asked a third person to step in and told them to go to the person they felt most attracted to. After a few minutes, the person went to the person who had the note with the word “yes.” This was our permission to do the constellation movement with Santos-Dumont. 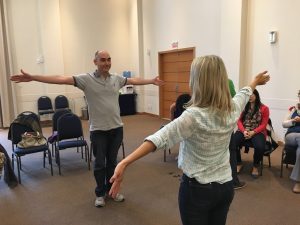 Without telling anyone what the movement was about, she asked a man and a woman to step into the circle. They both faced each other without knowing anything about the constellation movement. Only Simone and I knew that the man represented Santos-Dumont and the woman was his invention, the airplane. Almost immediately, the man stretched his arms out like they were wings. He stood looking at his plane and broke into a huge smile. The woman, secretly representing his airplane, stretched out her arms just like Santos-Dumont and she gave him a giant smile. They both looked at each other and then ran into each other’s arms.

At this point, Simone told the group who and what the two people were representing. The room broke into tears and the laughter of amazement. I was overcome with emotion from witnessing this amazing re-union. I was astounded at how the Field moved the man to raise his arms like an airplane without any prompting. As I stood looking at Santos-Dumont and thinking about everything he endured in his life and his struggle to bring flight to humanity, I felt a compulsion to go to him. He turned to me and we both just looked into each other’s eyes. Without any warning, I bowed to him in gratitude and with respect. I thanked him. I realized that the curse of Santos-Dumont was only about giving him the recognition he was denied most of the world. Most important, he wanted recognition from the arrogant American, which by then I knew I was representing. 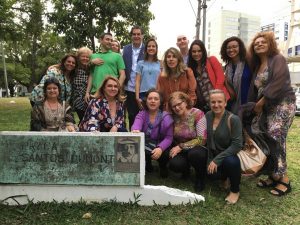 During the lunch break, some of the group walked to the park to pay respect to Santos-Dumont and to see the plaque with his name on it. Inscribed on the plaque was the date of his first flight, October 23, 1906. We all gasped. It was Sunday, October 23, 2016.